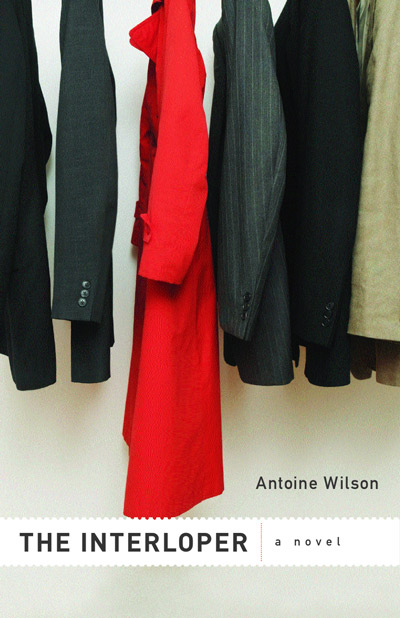 All Owen Patterson wants is a normal life and a happy marriage. But a year after the senseless murder of his brother-in-law, his wife remains in mourning and his in-laws won’t talk about anything but their dead son. The murderer, Henry Joseph Raven, is in prison, but to Owen, that isn’t punishment enough. Owen embarks on a quest to “balance the scales of justice,” writing letters to Henry Raven under the pseudonym Lily Hazelton. His plan: seduce the murderer, then break his heart.

As Owen pursues his self-appointed mission, Lily Hazelton develops into a curious amalgam of details from his imagination, snatches of his difficult childhood, and memories of his cousin Eileen, a suicide who was his first true love. Bringing together an epistolary game of cat-and-mouse and the harrowing record of one man’s psychological collapse, The Interloper is a compelling and original debut from a bold new writer.

As assured and sumptuously written as any first novel I’ve encountered–Antoine Wilson’s prose sings and the story he tells here is both clever and compelling. This is writing at its very best.

Antoine Wilson’s novel snuck up on me: deceptively normal prose, a tightening plot, a quickening read, and then before long I was up late all scared and sad and freaked out. Who is this guy? I’m keeping my eye on him and you should too.

The Interloper is tautly written, suspenseful, and abidingly strange, a first novel that defies expectations in the most delightful way. Antoine Wilson delves into the dark corners of the human psyche and we readily follow, guided by his keen intelligence, wry humor, and razor-sharp prose. At once horrifying and oddly affecting, this book makes for compulsive reading.

A taut debut novel…It’s clear from the start that Owen is doomed, but the queasy thrills of the novel derive from watching the scheme–and the marriage–unravel.

Oh, what thrilling dread, falling in with a character as twisted as the narrator of Antoine Wilson’s terrific first novel, “The Interloper.” It’s like leaving a party with a designated driver, only to discover as you swerve down the driveway that your new friend is drunker than you are. Or worse, completely insane.

His novel might be named for altogether different reasons, yet it’s author Wilson who has proven to be the true interloper. Although his pedigree is impressive (Iowa Writer’s Workshop, the Paris Review, Best New American Voices), Wilson has come seemingly out of nowhere to deliver a novel that is confident, well-paced and very, very creepy. Were he to meddle in literary affairs again and again, the world would be the better for it.

The pleasures of this wry debut novel lie not in wondering if things will turn out badly for Owen but in how badly they will go and how unreliable his narrative really is.

Wilson’s vivid first-person portrayal of Owen’s slow crescendo into obsession–despite its effect on the world he wants to restore–is disturbingly powerful…Wilson takes his readers down a dark spiraling path with an ever-increasing tempo where past childhood memories and hatred collide with resounding tragedy.

The Interloper on best-of-2007 lists:

The L Magazine’s Best of the Independent Press.

One thought on “The Interloper”