[Dutton’s own Diane Leslie, softening up the crowd.]

[“I got a new mailbox in Second City, so Raven wouldn’t suspect…”]

First of all, I want to thank everyone who came out to support The Interloper so far. We sold out of books at the Dutton’s reading and at the Endeavor signing!! (Luckily the good people from Dutton’s were able to take orders, most of which are already in and inscribed!)

Something I’ve been waiting to do since I first heard anyone read at a bookstore was to announce beforehand how long I would be reading. In this case, it was 12 1/2 minutes. When you let people know how long it’s going to take, you buy yourself an extra sliver of their attention. Five minutes in, they don’t have to start obsessing about when you’re going to wrap it up.

I can’t quite describe what it’s like to look out at a crowd of 60 people and see a combination of total strangers, former students, family friends, retail clerks, etc., waiting to hear you read something you carefully assembled alone, over the course of years, with no particular reader in mind. My eye doctor was there. The man who will deliver our child (end of August!) was there. It’s definitely a mental disjunct.

I’ve read the chapter a few times in public, and read it over and over into a microphone for a short film put together by my boy Brin Hill, and I still feel like I can get into it while I’m reading. I have the kind of mind that likes to wander, so this is good.

I’ll post that short film here one of these days soon, once I get the technical stuff sorted out. It’s really cool.

My favorite part was the Q & A. There’s something thrilling about being put on the spot like that. I think I did okay, though I did lean on a lemon-zester analogy a little much. I came up with some stunningly pithy responses later that night, lying in bed.

There were lots of questions about the origins of the book, and the voices in it, etc., and I’d like to answer some of those questions here in the coming weeks. But for now let’s start with a simple one:

Q: How long did it take you to write the book?

A: Good question, and one I will answer accurately here for the first time. I can’t say when I first got the idea, but the first writing on the book, stuff that got cut but essentially led me to Owen and his story, happened back in June, 2003. In that earlier draft, I see now, Owen was driving around the country while writing…quite different than how it turned out.

The last physical notebook I’ve got has a start date of January 2005, with no end date. According to my notes, I was working on 3rd draft revisions. 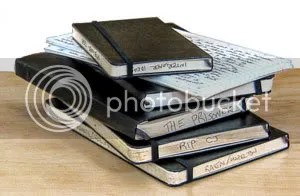 I signed with my agent in March 2005, worked on some more revisions and, according to my files, came up something recognizable as The Interloper by mid-2005.

Pretty quick, by my reckoning. But it’s not that long a book.

Finally, I want to shout out a big WOT-WHAT! to everyone who’s emailed me about The Interloper. Keep em coming!

And, if you feel so inclined, recommend the book, share your thoughts in an Amazon.com review, spread the word. This shiz is grass-roots, yo.

[At the Endeavor signing event.]