My second year at Iowa, I lived with three poets in a farmhouse out on Taft Ave SE.

Here’s a fake painting of it, complete with cut-and-paste signature. (It had been moved to that location some years before and so had no trees around it. Kind of creepy, huh?) 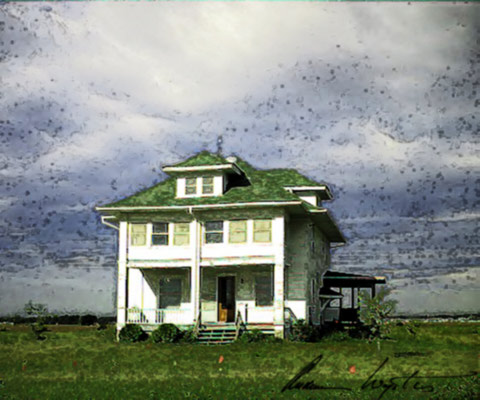 It’s gone now, or moved. Apparently, the owner’s son liked it so much he moved it around the corner and fixed it up for himself.

One of the understood duties of the farmhouse tenants was that we would have to throw a couple good parties every year, including at Halloween.

Being involved somewhat in the set-up of said bash, I didn’t have too much time to work on a costume. I found a cardboard box downstairs in the cellar and made it up to look like a TV set. Then I put on a blazer and tie, and I did my best to look like a news anchor, a talking head, complete with shorts.

We had a rubber rat lying around, so I added him to the costume, too, tying him to my blazer with a short “leash” of string. 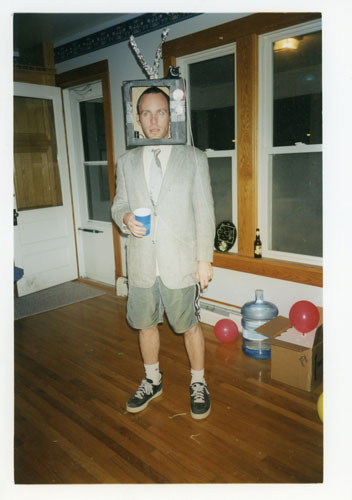 You can see the rat perched on top of the TV, and the string leading down to my jacket button.

Fun costume, right? People seemed to think so. But in a way I never expected and could not have predicted, the rat, that little black rubber rat, became a litmus test like no other I’ve seen before or since.

Every single poet I spoke to that that night had something positive to say about the rat. From “Nice rat,” to “I love the rat,” to “The rat makes the costume.”

And every single fiction writer wanted to cut the rat, edit him out, or at least get some satisfactory explanation as to why he was there.

2 thoughts on “poets versus fiction writers”