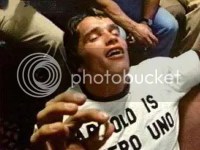 So this morning, for no particular reason, Chrissy and I decided to head to Starbucks for our morning beverages, something we usually only do on gym days. While we’re standing at the counter talking about nothing in particular, I see Chrissy’s eyes bug out wide at something behind me. I sort of glance back and see Maria Shriver. No biggie, she’s in our Starbucks all the time. But–and this is what made Chrissy’s eyes bug out–this time she’s chilling with Carolyn Kennedy. Good times.

In any case, I decide I want a muffin from the Pain Quotidien next door, so we head over. While we’re standing at that counter, the Governator walks in, looking for his wife and CK. Chrissy tells him that they’re over at Starbucks, and he says thanks. That’s when I open my mouth, fulfilling a silent promise I made to myself about a month or so ago.

Here’s how the conversation went, more or less. (Dialogue format totally ripped off from Tod Goldberg.)

Me: Hey Arnold, what’s they deal with supporting the toll road?

Me: The toll road through Trestles. What’s the story with you supporting that?

Arnold: We need it.

Me: We don’t need it to go through the state park.

Arnold: We need it. [A short speech on commitment to infrastructure.]

Me: There are other options. We’re talking about a state park here.

Arnold: This is why we have the Coastal Commission and these things. It’s not a dictatorship. The people have spoken.

Me: Good thing, too.

Chrissy: About that t-shirt you wore in Pumping Iron.

Chrissy: My husband wears one just like it, but with his name on it.

Me: I’m just glad I’m not wearing it right now.